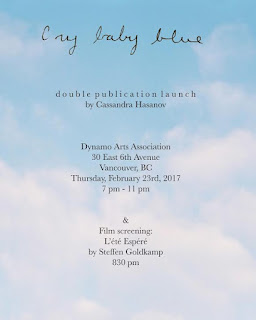 Join us for an evening of whimsical blues at Dynamo Arts Association for the launch of Cassandra Hasanov's two publications and a short film screening. Volume One presents the artist's photographs of the sky during her stay and studies at École nationale supérieure des Beaux-Arts de Paris in 2015, alongside a paint chip found in Vancouver, Canada. Volume Two is a series that presents paint chips in shades of blue renamed with titles of songs from the blues genre of music. During the evening there will be a screening of the short film L'été Espéré from the German director Steffen Goldkamp. Filmed during the summer of 2015, the film follows a handful of protagonists as they journey through the streets of Paris in today's modern world.

Submissions are currently open for:

Fill out the contact form below if you are interested in participating in an upcoming Print Ready group exhibition, or if you wish to coordinate a release event for a specific work.

Send us a link to your website or an image of your work, with a few sentences of description. Please indicate the format, size, and type of binding (if any) of the proposed work you wish to show.